I can’t believe how fast October has flown by! We are knee deep in pumpkin flavored everything and costumes right now but I want to take a break and share with you a recent session!

Marshal and Bekah have become some of my most loyal clients! I have known them since the good ol’ days of camp. The three of us worked together at Camp Eagle for a couple of summers as well as went to Texas Tech! Somewhere in that time, they fell in love and decided to get married! I got to be a part of all of it and I’m so glad they have decided to keep me around!

I have been terrible this month when it comes to blogging but let me play a little catch up before I jump into pictures.

1. I got a job! Hallelujah I have something to do during the day!

2. I spent 10 days at home soaking in Texas Tech everything and lots of family and friend time.

3. Did I mention I got to watch one of my best friends get married while I was there? Oh, and that I did so in a bridesmaids dress while standing next to her? Yeah that happened. (working on my 27 dresses)

Also while at home, I filled my schedule with photo shoots! ANNNND…

The Herron’s recently added a puppy to the mix and became a small family!

Kinzie joined us for our morning shoot on campus and for only being 4 months old, she did great! For those who don’t know, puppies are psycho! Kinzie was a natural model though, and only had breakdowns when we tied her to poles to get couple shots. (because that’s where the magic happens!) Don’t you agree? 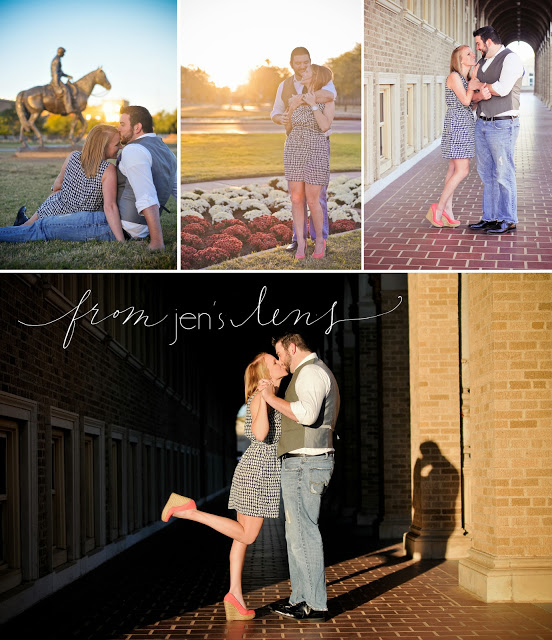 I just can’t gush about these two enough. We had such a spectacular morning and they reminded me why I get up at the crack of dawn to take pictures…even though we did have to take a Starbucks break to thaw out! It was worth it! Thanks y’all!